This post was written with Andrés Monroy-Hernández for the Follow the Crowd Research Blog. The post is a summary of a paper forthcoming in Computer-Supported Cooperative Work 2013. You read also read the full paper: The Cost of Collaboration for Code and Art: Evidence from Remixing. It is part of a series of papers I have written with Monroy-Hernández using data from Scratch. You can find the others on my academic website.

Does collaboration result in higher quality creative works than individuals working alone? Is working in groups better for functional works like code than for creative works like art? Although these questions lie at the heart of conversations about collaborative production on the Internet and peer production, it can be hard to find research settings where you can compare across both individual and group work and across both code and art. We set out to tackle these questions in the context of a very large remixing community.

Example of a remix in the Scratch online community, and the project it is based off. The orange arrows indicate pieces which were present in the original and reused in the remix.

Remixing platforms provide an ideal setting to answer these questions. Most support the sharing, and collaborative rating, of both individually and collaboratively authored creative works. They also frequently combine code with artistic media like sound and graphics.

We know that that increased collaboration often leads to higher quality products. For example, studies of Wikipedia have suggested that vandalism is detected and removed within minutes, and that high quality articles in Wikipedia, by several measures, tend to be produced by more collaboration. That said, we also know that collaborative work is not always better — for example, that brainstorming results in less good ideas when done in groups. We attempt to answer this broad question, asked many times before, in the context of remixing: Which is the better description, “the wisdom of crowds” or “too many cooks spoil the broth”? That, fundamentally, forms our paper’s first research question: Are remixes, on average, higher quality than single-authored works?

A number of critics of peer production, and some fans, have suggested that mass collaboration on the Internet might work much better for certain kinds of works. The argument is that free software and Wikipedia can be built by a crowd because they are functional. But more creative works — like music, a novel, or a drawing — might benefit less, or even be hurt by, participation by a crowd. Our second research question tries to get at this possibility: Are code-intensive remixes, higher quality than media-intensive remixes?

We try to answers to these questions using a detailed dataset from Scratch – a large online remixing community where young people build, share, and collaborate on interactive animations and video games. The community was built to support users of the Scratch programming environment: a desktop application with functionality similar to Flash created by the Lifelong Kindergarten Group at the MIT Media Lab. Scratch is designed to allow users to build projects by integrating images, music, sound and other media with programming code. Scratch is used by more than a million, mostly young, users.

Measuring quality is tricky and we acknowledge that there are many ways to do it. In the paper, we rely most heavily a measure of peer ratings in Scratch called loveits — very similar to “likes” on Facebook. We find similar results with several other metrics and we control for the number of views a project receives.

In answering our first research question, we find that remixes are, on average, rated as being of lower quality than works of single authorship. This finding was surprising to us but holds up across a number of alternative tests and robustness checks.

In answering our second question, we find rough support for the common wisdom that remixing tends to be more effective for functional works than for artistic media. The more code-intensive a project is, on average, the closer the gap is between a remix and a work of single authorship. But the more media-intensive a project is, the bigger the gap. You can see the relationships that our model predicts in the graph below. 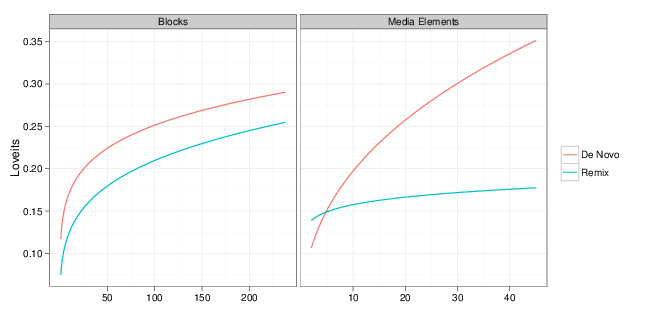 Both of us are supporters and advocates of remixing. As a result, we were initially a little troubled by our result in this paper. We think the finding suggests an important limit to the broadest claims of the benefit of collaboration in remixing and peer production.

That said, we also reject the blind repetition of the mantra that collaboration is always better — for every definition of “better,” and for every type of work. We think it’s crucial to learn and understand the limitations and challenges associated with remixing and we’re optimistic that this work can influence the design of social media and collaboration systems to help remixing and peer production thrive.

For more, see our full paper, The Cost of Collaboration for Code and Art: Evidence from Remixing.

2 Replies to “The Cost of Collaboration for Code and Art”