Nearly a week after its release, I suspect most of my audience has seen the FSF’s Freedom Fry video of Stephen Fry wishing the GNU project and the free software movement a happy birthday. While I’m not usually one for birthdays, I thought I’d at least reflect on it briefly. Certainly, it’s a wonderful video — for which Matt Lee at others at the FSF should be proud. But it’s fact that the GNU project is now twenty-five years old that is truly noteworthy. 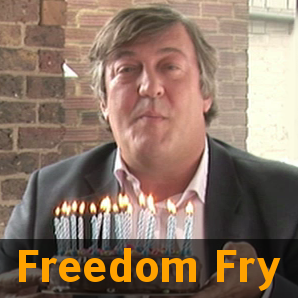 Wikipedia says that a generation (i.e., the average interval between the birth of parents and of their offspring) is somewhere between 25-30 years in most of the Western world. Twenty-five years isn’t just a big number divisible by five, it marks a generational shift.

Certainly, GNU has matured and accomplished wonderful things in last quarter-century. More importantly perhaps, it’s produced wonderful progeny. It has spawned hundreds of thousands of free software projects, thousands of free or nearly-free operating systems, and an unbelievably vibrant global free and open source software community. Beyond the software realm, the free culture movement, most free licensing projects, and much of the access to knowledge movement can trace a connection back to GNU. We are living, and building, a new generation of the free software movement.

It’s not been an entirely smooth ride, feelings have been hurt, and it’s hard for GNU’s proponents — myself included — to not wince at some of what has been done in GNU’s name and because of its example. But even cynics must admit: the world is an undeniably better place because of GNU and the efforts and ideas that it has motivated.

I turn 28 in December and have spent my entire computing life in world where free software was a viable option and an active form of resistance. Here’s to another generation! May we be half as productive and positive as the last!