It seems that nearly all computer monitors have now switched from a 4:3 aspect ratio popular several years ago to a "wide screen" 16:10 and now mostly to an even wider 16:9.

But screen sizes are usually measured by their diagonal length and those sizes have not changed. For example, before I had my Thinkpad X201, I had a X60 and a X35. They are similar laptops in the same product line with 12.1" screens. But 12.1" describes the size along the diagonal and the aspect ratio switched from 4:3 to 16:10 between the X60 and the X201. As the screen stretched out but maintained the same diagonal length, the area shrunk: from 453 square centimeters to 425.

But screens are not only getting smaller, they are also getting less useful. The switch to wider aspect ratios is done so that people can watch wide screen movies while using a larger proportion of their screens. Of course, the vast majority of people’s time on their laptops is not spent watching wide screen movies but in programs like browsers, word processors, and editors. Because most of our writing systems lay out documents from top to bottom, the tools we most frequently use to display (and then scroll through) the things we read primarily use vertical screen space — the dimension that is shrinking.

If you have a desktop monitor, you might rotate the whole thing 90 degrees and "solve" the problem. If you’re on a laptop though (as I usually am) this is clearly not an option.

I am not the first person to be annoyed by this trend. In fact, many recent desktop UI changes are designed to work around this issue. In the free software world, both Unity and GNOME 3 have made efforts to hide, merge, or otherwise get ride of title bars, menu bars, and panels that take up dwindling vertical space. I use Awesome which I’ve mostly set up to do two side-by-side terminals with very little in the way of menu bars. 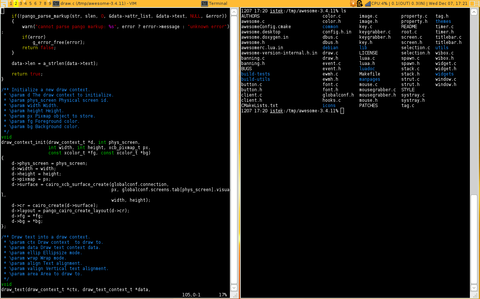 Applications are the worst offenders and the solutions for those things that won’t run in a terminal (or people that don’t want to live there) are still lacking. I have been using Firefox’s Tree Style Tab extension to move tabs to the side and hand-customized toolbars that squeeze everything I need (i.e., back, forward, stop, refresh, and URL bar) onto a single menu bar.

But the situation still drives me crazy. I’d love to hear what others are doing.