It’s Seafair weekend in Seattle. As always, the centerpiece is the H1 Unlimited hydroplane races on Lake Washington.

In my social circle, I’m nearly the only person I know who grew up in area. None of the newcomers I know had heard of hydroplane racing before moving to Seattle. Even after I explain it to them — i.e., boats with 3,000+ horse power airplane engines that fly just above the water at more than 320kph (200mph) leaving 10m+ (30ft) wakes behind them! — most people seem more puzzled than interested.

I grew up near the shore of Lake Washington and could see (and hear!) the races from my house. I don’t follow hydroplane racing throughout the year but I do enjoy watching the races at Seafair. Here’s my attempt to explain and make the case for the races to new Seattleites.

The wooden U-60 Miss Thriftway circa 1955 (Thriftway is a Washinton-based supermarket that nobody outside has heard of) below is a picture of old-Seattle awesomeness. Modern hydroplanes are now made of fiberglass but two out of three isn’t bad. 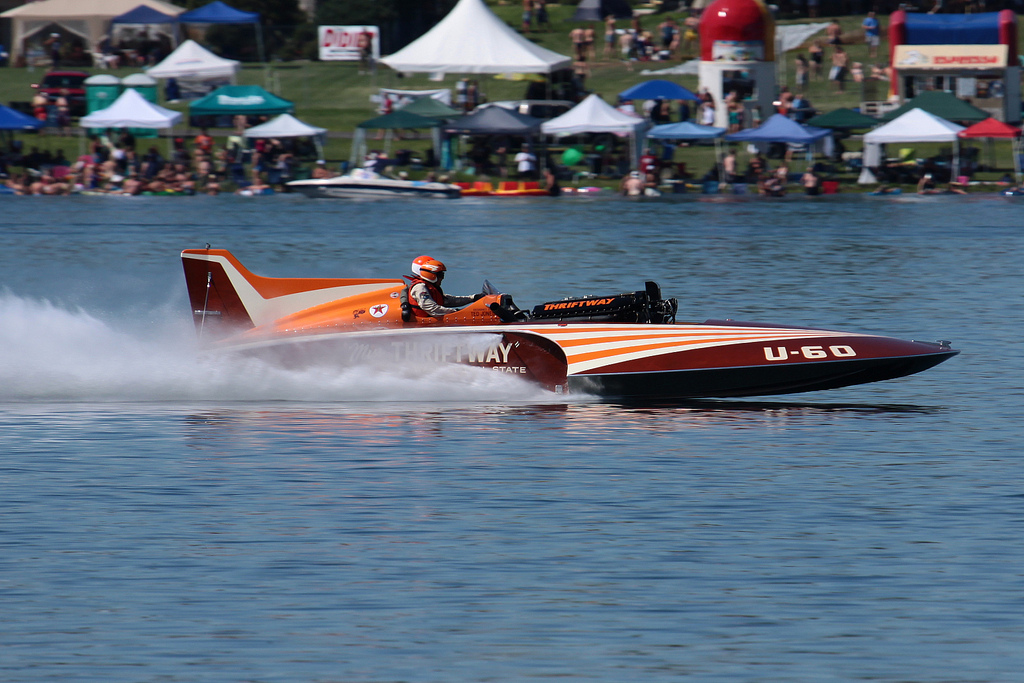 Although the boats are racing this year in events in Indiana, San Diego, and Detroit in addition to the two races in Washington, hydroplane racing retains deep ties to the region. Most of the drivers are from the Seattle area. Many or most of the teams and boats are based in Washington throughout the year. Many of the sponsors are unknown outside of the state. This parochialness itself cultivates a certain kind of appeal among locals.

In addition to old-Seattle/new-Seattle cultural divide, there’s a class divide that I think is also worth challenging. Although the demographics of hydro-racing fans is surprisingly broad, it can seem like Formula One or NASCAR on the water. It seems safe to suggest that many of the demographic groups moving to Seattle for jobs in the tech industry are not big into motorsports. Although I’m no follower of motorsports in general, I’ve written before cultivated disinterest in professional sports, and it remains something that I believe is worth taking on.

It’s not all great. In particular, the close relationship between Seafair and the military makes me very uneasy. That said, even with the military-heavy airshow, I enjoy the way that Seafair weekend provides a little pocket of old-Seattle that remains effectively unchanged from when I was a kid. I’d encourage others to enjoy it as well!