This post was written with Andrés Monroy-Hernández. It is a summary of a paper just published in American Behavioral Scientist. You can also read the full paper: The remixing dilemma: The trade-off between generativity and originality. It is part of a series of papers I have written with Monroy-Hernández using data from Scratch. You can find the others on my academic website.

Remixing — the reworking and recombination of existing creative artifacts — represents a widespread, important, and controversial form of social creativity online. Proponents of remix culture often speak of remixing in terms of rich ecosystems where creative works are novel and highly generative. However, examples like this can be difficult to find. Although there is a steady stream of media being shared freely on the web, only a tiny fraction of these projects are remixed even once. On top of this, many remixes are not very different from the works they are built upon. Why is some content more attractive to remixers? Why are some projects remixed in deeper and more transformative ways? 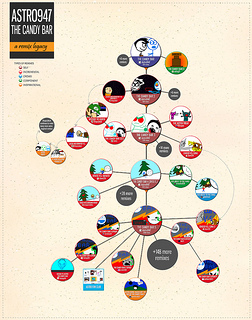 We try to shed light on both of these questions using data from Scratch — a large online remixing community. Although we find support for several popular theories, we also present evidence in support of a persistent trade-off that has broad practical and theoretical implications. In what we call the remixing dilemma, we suggest that characteristics of projects that are associated with higher rates of remixing are also associated with simpler and less transformative types of derivatives.

Our study is focused on two interrelated research questions. First, we ask why some projects shared in remixing communities are more or less generative than others. “Generativity” — a term we borrow from Jonathan Zittrain — describes creative works that are likely to inspire follow-on work. Several scholars have offered suggestions for why some creative works might be more generative than others. We focus on three central theories:

Our second question focuses on the originality of remixes and asks when more or less transformative remixing occurs. For example, highly generative projects may be less exciting if the projects produced based on them are all near-identical copies of antecedent projects. For a series of reasons — including the fact that increased generativity might come by attracting less interested, skilled, or motivated individuals — we suggest that each of the factors associated with generativity will also be associated with less original forms of remixing. We call this trade-off the remixing dilemma.

We answer both of our research questions using a detailed dataset from Scratch, where young people build, share, and collaborate on interactive animations and video games. The community was built to support users of the Scratch programming environment, a desktop application with functionality similar to Flash created by the Lifelong Kindergarten Group at the MIT Media Lab. Scratch is designed to allow users to build projects by integrating images, music, sound, and other media with programming code. Scratch is used by more than a million users, most of them under 18 years old.

To test our three theories about generativity, we measure whether or not, as well as how many times, Scratch projects were remixed in a dataset that includes every shared project. Although Scratch is designed as a remixing community, only around one tenth of all Scratch projects are ever remixed. Because more popular projects are remixed more frequently simply because of exposure, we control for the number of times each project is viewed.

Our analysis shows at least some support for all three theories of generativity described above. (1) Projects with moderate amounts of code are remixed more often than either very simple or very complex projects. (2) Projects by more prominent creators are more generative. (3) Remixes are more likely to attract remixers than de novo projects.

To test our theory that there is a trade-off between generativity and originality, we build a dataset that includes every Scratch remix and its antecedent. For each pair, we construct a measure of originality by comparing the remix to its antecedent and computing an “edit distance” (a concept we borrow from software engineering) to determine how much the projects differ.

We find strong evidence of a trade-off: (1) Projects of moderate complexity are remixed more lightly than more complicated projects. (2) Projects by more prominent creators tend to be remixed in less transformative ways. (3) Cumulative remixing tends to be associated with shallower and less transformative derivatives. That said, our support for (1) is qualified in that we do not find evidence of the increased originality for the simplest projects as our theory predicted.

We feel that our results raise difficult but important challenges, especially for the designers of social media systems. For example, many social media sites track and display user prominence with leaderboards or lists of aggregate views. This technique may lead to increased generativity by emphasizing and highlighting creator prominence. That said, it may also lead to a decrease in originality of the remixes elicited. Our results regarding the relationship of complexity to generativity and originality of remixes suggest that supporting increased complexity, at least for most projects, may have fewer drawbacks.

As supporters and advocates of remixing, we feel that although highly generative works that lead to highly original derivatives may be rare and difficult for system designers to support, understanding remixing dynamics and encouraging these rare projects remain a worthwhile and important goal.

9 Replies to “The Remixing Dilemma: The Trade-off Between Generativity and Originality”