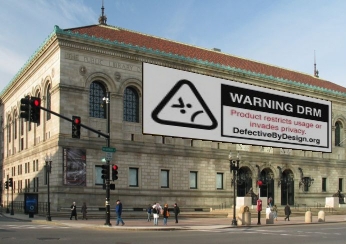 On Saturday February 9th, at 13:00, I’m going to be joining free software and anti-DRM activists to protest the use of DRM by the Boston Public Library on parts of its electronic collection.

Those of us protesting are unhappy because the BPL has launched a new service powered by a company called OverDrive. The system gives BPL patrons access to books, music, and movies online — but only if they use a Microsoft DRM system.

There are lots of problems with the introduction of this system: it bars access to users of GNU/Linux and MacOS and creates a dependence on a single technology vendor for access. These are important issues, certainly. The worst problem, however, is much more fundamental.

By adopting a DRM system for library content, the BPL is giving OverDrive, copyright holders, and Microsoft the ability to decide what, when, and how its patrons can and cannot read, listen, and watch these parts of the BPL collection. They are giving these companies veto power over the BPL’s own ability to access this data — both now and in the future. Cryptographically, BPL is quite literally handing over the keys to their collection. In the process, they are not only providing a disservice to their patrons. They are providing a disservice to themselves.

The first-sale doctrine says that libraries can do essentially whatever they like with copies of books they purchase short of duplication, modification, or performance. Of course, copyright holders would prefer to charge a toll every time someone checks out a book. Public libraries were possible in spite of this desire because they were able to exploit power over the possession and control of their books in the interests of their patrons. With DRM, libraries will reduced to powerlessness.

Of course, times have changed. As media and the ways we interact with it is increasingly digital, libraries have changed and will need to change more. But if public libraries are to succeed at their fundamental mission of spreading knowledge and serving communities, this change can’t be at the expense of patrons’ ability to control their own technology and libraries’ ability to control their own collections.

I’ve supported my academic library, MIT Libraries, as they took a risk and stood up to DRM when other institutions did not. And they won.

BPL is the largest municipal library in the US and the third largest US library overall. It is the first library to be supported publicly, to be open to the public in the US, and to allow patrons to take home books to read and use them. BPL has an opportunity now to continue this history of leadership, of access, and of patron empowerment.

If BPL stands up against DRM and in favor of its patrons’ freedom and its own control of its technical destiny and collection, it may set an important precedent. If you’re in or near Boston, please join me in Copley Square on Saturday to help make this happen. If you’re not near Boston, please help put pressure on similar efforts in your own communities.

14 Replies to “Protest DRM at the Boston Public Library”