Just a couple years ago, music and technology companies would advertise their DRM schemes. While these technologies only served to prevent users of computers and consumer electronics devices from doing things, the media and technologies companies tried to spin it positively. Think of all the wonderful media that the music, film, and publishing industries will be willing to distribute to you at the click of a button, they said. All they asked for in return is the keys to your computer and the legal right to attack and sue you if you try to take control.

As everyone who purchased iTunes music and made the mistake of buying a non-Apple DAP incapable of reading Apple DRMed music knows, DRM is a bad deal for consumers. Users are always better off with an unencumbered media file. In all the excitement over major label content, some consumers didn’t see this immediately.

With time though, the inconvenience of a computer that does the Apple and the RIAA wants over what you want hit home. This, combined with activist projects like the FSF’s Defective By Design, have turned the tide. The DRM label that used to be a badge of honor is now a stigma that smart companies are going out of their way to avoid.

This past weekend, I saw this flier from Calabash Music in the crepe store across the street: 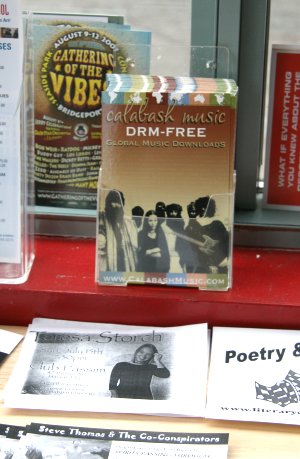 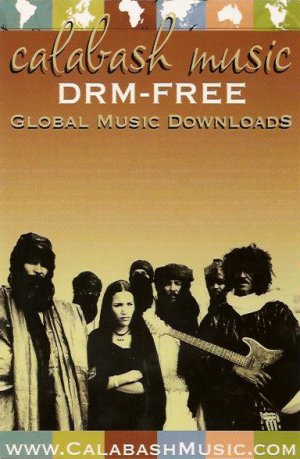 The store served a general, non-technical audience. DRM-FREE, it turns out, is a good way to sell music. Not just to geeks but to any consumer who has been stymied unfairly by DRM or knows someone who has. That, it turns out, is a whole lot people. Consumers know what DRM is and they know don’t like it.

As consumers learn more about DRM, they want to avoid it. Seeing this, the companies that produce DRM are looking for ways to escape. The Apple/EMI deal seems to be an attempt to protect market share that the use of DRM is threatening. Others, like HBO’s Bob Zitter, are disingenuously attempting to escape the stigma of DRM by simply rebranding the technology.

Of course, DRM suffers from a much more fundemental problem than bad branding. The problem with DRM is that consumers don’t like what it does and are only sometimes willing to suffer through it when not given the choice. Increasingly often, as with in the example of the flier I found, consumers have a choice. Things don’t look good for DRM. For DRM opponents, the self-defeating nature of the technology is our greatest ally.