At OSCON this year the organizers gave us a discount coupon at Powell’s technical bookstore. By the time I got there the technical books that were of most interest to me had been raided pretty thoroughly (I must have good taste). So I was forced to be a little more creative.

Among my favorite finds from the day was a little book called Harmonograph: A Visual Introduction to Harmony by Anthony Ashton. The book is part math book, part shop book, part art book, and part music book.

A harmonograph is a simple instrument invented in the mid nineteenth century and that reached some sort of in vogue status before the beginning of the twentieth.. There are a number of different types of harmonographs but the simplest model has two pendulums suspended through holes in a table that are swinging at right angles to each other. One of those pendulums has a piece of paper attached to its top and the other one has a pen.

Now, Pythagoras found that musical harmony to appear when the ratio of the frequencies (or wavelengths) of the sounds being produced consist of certain ratios consisting of small numbers: like 1:1, 2:1, 3:2 (these would correspond to unison, an octave, and a fifth).

The book gives a crash course in the physics and math involved, the process of building a harmonograph, and idea of musical harmony. The rest is pretty pictures like this one: 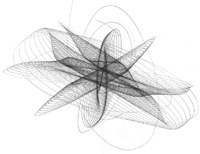 It’s very interesting to see the visual representation of certain harmonies which are very easy — non-challenging — to grasp audibly (unison and an octave) and to see that the harmonographs are equally easy to grasp visually. As we move to more complex and dissonant sounds, you can see the patterns getting more complex and the form getting lost in the "noise."

Ashton is really into harmonographs and has obviously devoted a large amount of his life to playing with and building and improving his toys2. I’m not so motivated to follow his lead but the book was interesting and fun. I read it one sitting on a Sunny day.

I’d love to see some way to create a computerized harmonograph that instead of just mapping individual harmonies, could actually work over time. It would be cool to, at a glance, be able to compare the harmonic make-up of a piece by Bach with a piece by Bartók.

If you’re interested, you can buy the book at your local bookshop or you can do it online at Powell’s.