It’s been reported for some time now that the number of active editors on Wikipedia (usually defined as people who have edited at least 5 times in a given month) peaked in 2007 and has been mostly stable since then. A graph of the total number of active editors in every month since Wikipedia’s founding is shown below. The graph shows the aggregate numbers for all language Wikipedias. English Wikipedia is the largest component of this and is generally more variable. That said, very similar patterns exist for most larger languages. 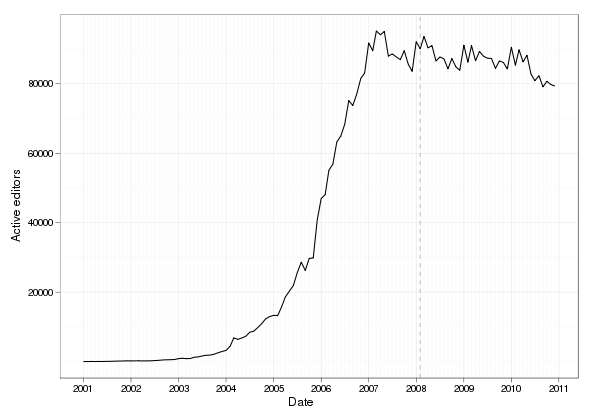 Felipe Ortega, who has provided many of these statistics, has warned against fatalist claims. Although there seems to be a decrease in the total number of active editors over the last two years, the situation seems to have somewhat stabilized in most languages. New editors in Wikipedia are replacing folks at almost the rate that they are leaving. It is also widely known that the number of readers of Wikipedia has been increasing during this period. According to the report cards released by the foundation using comScore data, the number of unique visitors to Wikipedia each month has increased by 61 million people in the last year — over 17%.

This discrepancy between rising readership and stable or sinking editorship should raise major concern. After all, the Wikimedia Foundation’s mission is two part: (1) to empower and engage people around the world to collect and develop educational content and (2) to disseminate it effectively and globally. Although the Foundation report cards include measures of raw levels of editorship, a better metric of engagement and empowerment might be the proportion of readers who engage in editing.

I could not find reliable data on the number of unique readers reached each month for more than a few months in the last year. What is available, however, is wonderful data on page views each month going back to 2008. Analysis of the data from available report cards show that, at least during the last year, there is a very stable ratio of 35 page views per unique visitor, as estimated by comScore. Using that measure, we can do a back of the envelope estimation on the proportion of users that are editors for the period where page view data is available, dating back from February 2008 ( marked with the grey dashed lined above).

The graphs below show the very different results you get when you consider the change in the number of Wikipedia editors and the change in the editor-to-reader ratio. Once again, these data are combined data for all language Wikipedias although graphs look very similar for most larger languages. The results are striking. Although there has been a 12% decrease between February 2008 and December 2010 in the number of active editors, there is a 42% decrease in the proportion of readers who edit at least five times a month. We can see that fulfilling the first half of the Wikimedia mission remains a struggle. 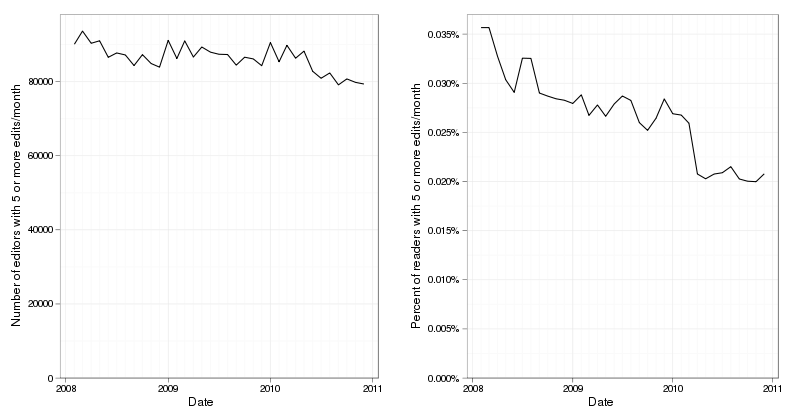 Although the graphs above do not say anything directly about the most active core contributors to Wikipedia, the fact that Wikipedia is being maintained by a tiny — and shrinking — proportion of its readership does mean that the idea behind Wikipedia is under threat.

Although none are as big as Wikipedia, there are lots of good encyclopedias out there. The reason Wikipedia is different, interesting, and important is because — unlike all those others — Wikipedia is the encyclopedia that anyone can edit. Wikipedia is powerful because it allow its users to transcend their role as consumers of the information they use to understand the world. Wikipedia allows users to define the reference works that define their understanding of the their environment and each other. But 99.98% of the time, readers do not transcend that role. I think that’s a problem. Worse, that the number is growing.

The Wikimedia Foundation recently ran a major successful effort to attract donations in its annual fundraiser. Jimmy Wales’ smiling mug is apparently enough in the way of motivation to get something like 1% of its readers to donate money to support the project. I think that’s very good news. If the Wikimedia community can entice even half of those people to contribute through an increased involvement in the projects themselves, they might do more than ensure Wikipedia’s continued growth. They would help take a step toward the empowerment and engagement of those users in sharing their own knowledge, and the continued fulfillment of a critically important mission.

15 Replies to “Editor-to-Reader Ratios on Wikipedia”